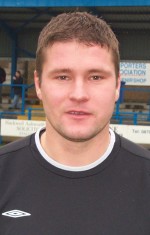 Wigan born Phil joined Atherton LR in 1997, and less than a year later was signed on at Spotland to play for Rochdale. He never really broke through into the first team ranks, though in the games that he did play, he managed to keep more clean sheets than he conceded. After spending a couple of months on loan to Scarborough in 2000/2001, and then a three months on loan at Chester, Phil joined Bangor City, where he became something of a cult hero, and was awarded the nickname of Elvis. Whilst at Bangor he played twice in the UEFA cup, once in 2002 against Sartid, a former Yugoslavian team, and in 2003 against Gloria Bistrita a Romanian team. Unfortunately, Bangor did venture any further in either year. He stayed in the Welsh Premier division for another season, leaving at the end of 2003/2004 to join Prescot Cables, for whom he has played 19 games, and kept 4 clean sheets. Keen to move back up the pyramid, he joins Celtic as Peter Wragg's first signing due to the injury to Craig Dootson. Too good to be a bench keeper, he rejoined Bangor City.
Career
Position
Goalkeeper
Born
30th Mar 1976 (45 years)
Joined
1st Nov 2004
Left
24th Jan 2005
Last App
8th Jan 2005
Last Goal
Never Scored
Career
Appearances
11
Goals
0
Assists
0
Red Cards
0
Yellow Cards
0
Points
9 / 33
Average Points
0.82
Wins
3
Draws
0
Losses
8
Total Pitch Time
990 mins
Appearances
Sponsors
Main club sponsor