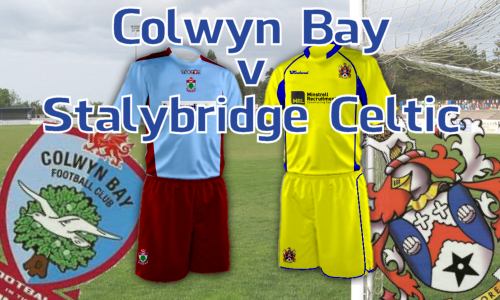 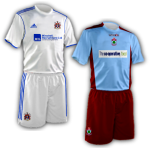 The first half had seen the visitors look a little hesitant and short on confidence. Playing against the wind didn't help Celtic, but did help the Seagulls. Celtic did not look in the game at all during the first half, and spent the time defending, keeping Colwyn at bay. Kevin Holsgrove gave a signal of intent with a low drive that on-loan keeper Alex Cairns saved well, but after Sam Egerton brought down Danny Lloyd near the box, earning a yellow card in the process, Sean Williams fired in a free kick that evaded everybody and was met by veteran defender, Frank Sinclair at the back post with a bullet header.

Mitchell Austin almost got Celtic back in it after Jamie Mullan low cross was back heeled towards goal minutes after the restart, but Colwyn Bay's stand-in keeper, Andy Metcalf, read the situation well, and scooped the shot up. Launching the ball up-field almost worked for Colwyn Bay, with Danny Lloyd firing wide, so they tried it again, this time Holsgrove taking the ball down and finding Gareth Evans completely unmarked in the corner of the box with the time and space and composure to curl the ball into the back of the net.

It got worse for Celtic when Egerton caught Lloyd for a second time and got a second yellow. It could have been yet worse, but Cairns caught Sean Williams free kick.

Celtic got a much needed break when Kevin Holsgrove kicked petulantly out at Tim Ryan as shepherded the ball out, earning a straight red. Ten against ten Celtic had a sniff of a chance, and right before the interval Greg Wilkinson had Celtic's best chance of the half, but his skimming shot was fairly comfortable for Metcalf.

With the wind at their backs, Celtic needed to get off to a good start in the second half, and Celtic did look the more lively, although still lacking teeth. Wilkinson fired a low shot wide from distance, and Mullan cut inside and tried to place his shot beyond the keeper's reach, but didn't. Wilkinson's placed shot was deflected towards the keeper, and Mullan's second chance was over the bar. Colwyn Bay looked lost without their target man, whilst Celtic kept growing in confidence.

When John McKenna brought down Mitchell Austin right on the edge of the box, Adam Pepper took the free kick, and what a free kick, just taking a nick off the outside edge of the wall leaving Metcalf with no chance, not that he?d have reached it anyway.

Only a goal behind and level on players, Celtic looked the better team, and Colwyn were rocking. Pepper aimed top corner, and Metcalf could only parry downwards where Sheriff was arriving, but he caught his volley wrong, sending the shot over the bar when it looked easier to score. A Minute later and he had another chance from a corner routine that saw Pepper launch the ball into the box, and Sheriff out muscled two defenders and the keeper to reach the ball first and score a very good header with ten minutes to go.

Wilkinson almost gave Celtic the lead but it was Mitchell Austin who provided Celtic the three points when his wicked cross for Jack Laird was unwittingly intercepted by Mike Lea, the ball bouncing off him and past Metcalf for a last gasp winner for Celtic. Although it was an own goal, it was a winning goal as far as Celtic were concerned, and it gives them the confidence ahead of the Hinckley game on Saturday.