Lesson in football
By Iain Benson 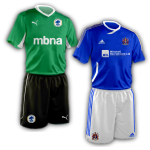 Celtic had a much better second half, but the damage was done in the first half as Chester put Celtic to the sword with a clinical display that punished every defensive mistake.

It didn't take long for Antoni Sarcevic to capitalise on the first defensive error, with Celtic a little unfortunate as Kristian Platt's clearance crashed back off a fellow defender, fell to ex-Celt Dave Hankin, who found Antoni Sarcevic via Nathan Jarman's shin, to open the scoring.

Celtic were struggling to respond, with the Chester midfield holding Celtic at bay. As fast as the ball was cleared, it was right back in the mix for Chester to attack Celtic with. Hankin headed wide from a corner, before Iain Howard forced Cairnes into a good save, the Celtic keeper unlucky for the rebound to fall to Nathan Jarman who fired home. Iain Howard then added a rapid brace to the score line first firing across Cairnes from Williams's through ball before adding the goal of the game off William's looping cross from one side, volleying the ball into the top corner leaving the score-line 4-0 at the interval, and Celtic licking their wounds.

Celtic needed to get back into the game in the second half quickly, but hesitation between Greg Wilkinson and Alex Cairnes allowed Sarcevic to take the ball and make it five for the visitors. It could have been six moments later when Sarcevic hit the woodwork.

A free kick just outside the box was a chance for Celtic to get some pride back, but Jamie Mullan's curling effort was just wide. However, Celtic did find an opening, Mitchell Austin's excellent run and pull back for Jack Laird who swept home an excellent shot from the edge of the box off the pinpoint pass. The goal revitalised Celtic, Wilkinson tried a couple of efforts from distance, both clearing the bar, and Corey Gregory forced Jon Danby into a decent stop.

It was Chester who scored next, Iain Howard claiming the match ball when he pounced on the loose ball after Cairnes had pulled off a great stop at the feet of Sarcevic. Celtic were saved from seven when Sarcevic hit the side netting.

Jordan Barrow took two attempts to get on the score sheet as Jamie Mullan forced Danby into a decent stop, the Chester keeper back on is feet to block as Barrow fired in the loose ball, but was helpless as Barrow again got the rebound and prodded home. Greg Wilkinson almost added a third for Celtic, with a curling free kick, but Danby was well placed for the catch.

It was a lesson in football for Celtic, one they can hopefully take with them as they face a second stern test on Tuesday at Guiseley.