Brackley win at a canter
By Debbie Taylor 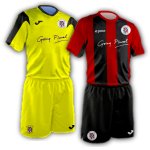 Two goals in two minutes in the first half ended this game as a contest before it had begun, with Celtic unable to defend a set-piece, there was only going to be one winner.

An early corner to the home side was all to easily dispatched by the rising head of Marvin Robinson who seemed to have the freedom of the park, and it set the pattern for the game. Especially when almost from the restart a whipped in ball form the wing was coolly turned in by Owen Story to make it two for Brackley.

Celtic couldn't get going, with Kristian Platt hopefully firing through a crowd off a corner, and Mitchell Austin's run and shot straight at Billy Turley, and so the half finished with Celtic trailing. Again.

The second half saw Brackley start well, Alex Cairns denying Robinson his second with a fine stop, before losing out in the crowded box off a corner to Brett Solkhon, who almost headed the ball out of Cairns's hands to increase Brackley's lead.

Prince Haywood was on hand when Owen Story beat Cairns in the corner of his box, and tried to cut the ball back from an acute angle, before Celtic created a chance out of nothing. Jamie Mullan evaded challenges on the wing, and cut the ball back from the by-line for Mitchell Austin running in. Austin hit it first time, past the outflung hand of Turley.

Any thought of a storming finally dissipated when Glenn Walker scampered down the wing, went one-on-one with Cairns and finished smartly. He could have had another seconds later, but for Mark Lees heading his effort away from under the bar.

All in all, a bad day at the office for Celtic who now stretch their winless run to five.