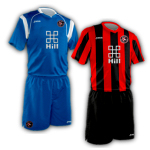 Celtic made it five unbeaten with a Stirling performance against a Histon side that took an hour to get going.

The first half saw total Celtic dominance, with Greg Wilkinson unlucky in the opening exchange to see his fine effort fly wide of the mark, before Tom Buckley saw his goalbound effort deflected wide. Callum Kitscha denied Buckley on his second attempt with a decent stop, and then denied Kristian Platt's free kick, but there was nothing the Histon keeper could do when Buckley latched onto an uncleared free kick to smash home Celtic's deserved opener. Wilkinson again fired wide after cutting inside from the wing and curling his effort across the face of goal with Kitscha stranded. Right before the interval, Platt's stunning free kick almost pushed Kitscha back into his own net as he blocked the thunderous drive to keep Histon in touching distance at the interval.

Just after the hour mark, Histon finally got their game into gear having desperately fired wide from distance early in the half, when James Stevenson burst through the Celtic defence and forced Alex Cairns into a stunning one handed save. Last ditch defending denied Stevenson an equaliser as Histon pushed Celtic further and further back towards their own goal, similar bodies on the line denied Fitzimmons, and there was relief when Lewis Taafe's final effort was tame, giving Celtic some breathing room.

The game was made safe in stoppage time when Adam Pepper produced a contender for goal of the season, curling in a thirty yard shot that Kitscha just couldn't reach.