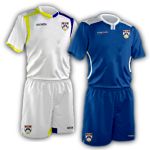 Celtic grabbed a couple of early goals to make this a comfortable win, despite a fight back from Lowestoft.

Steve Tames grabbed his and Celtic's first in the opening minutes from close range, side footing in Adam Farrell's low cross, slotting home underneath the keeper. Tames was a constant thorn to the Lowestoft defence, firing one over the bar before an Oliver Crowley dash and run got him to the by line, where he pulled the ball to Tames. Tames turned neatly and once again fired under Marcus Garnham.

Celtic sat on their two goal cushion soaking up pressure from the visitors, and there was pressure, with a whole succession of corners, but no real chances, but for a Sam Nunn header that was over the bar from a corner. At the other end, Bohan tried a repeat of his wonder goal at Tamworth with a cracker that flashed over the bar. Adam Farrell also went over with his effort from outside the box.

Celtic started the second half on top again, with Jack Higgins, Adam Farrell and John Shaw all going close before an Adam Farrell free kick was only half cleared and John Shaw put a powerful header into the top corner to give Celtic an unassailable lead.

Moments after Aidan Chippendale's curled effort nipped wide, Lowestoft showed what they can do if allowed when Celtic collectively fell asleep and allowed a simple defence splitting pass to put Jake Reed one-on-one with Tony McMillan, and the Lowestoft striker made no mistake to pull one back.

Celtic didn't hurry at restoring a three goal cushion, more content with maintaining possession until a chance could be fashioned. Chances did come, with Steve Tames getting close to having a hat-trick, whilst Farrell also went fairly close. Robert Eagle tried his luck from distance, and Jake Reed should really have pulled another back in stoppage time after a swift move from Lowestoft saw Chris Henderson pull the ball back for him to rifle wide of the mark.

Alex Johnson held the ball up well in the corner for Celtic, eventually running the clock down and giving Celtic a solid 3-1 win.