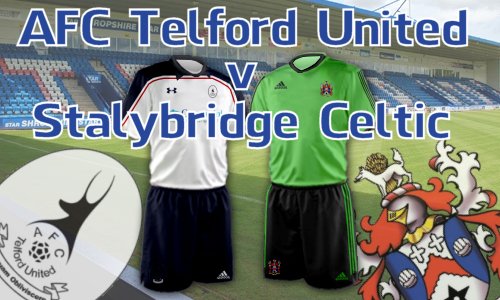 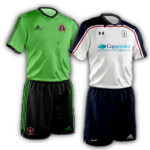 For the first them in a long time Celtic travelled to Telford as favourites. Both sides set about the game evenly for the first 10 minutes with nothing of note happening.

Then on 11 minutes, John Shaw shepherded McCarthy out of the box as the latter went to ground before getting up and chasing after the ball. The referee then inexplicably pointed to the spot for an alleged push in the back. The decision was met with laughter from the home crowd who couldn't quite believe their luck.

Sean Clancy stepped up and applied the coup de gr?ce.

Telford continued to hassle Celtic, giving away a few debatable free kicks in the process as the referee set about evening things out. Celtic gained a free kick in a dangerous position on the edge of Telford box. Farrell rolled the ball towards Dixon but the ball was short and the Telford defender stole it and broke away down the left hand side. The ball was played to Clancy who rolled a ball across the box which was fluffed by McCarthy. No such chance was afforded by the superb Dave Hibbert, who slotted the ball into the net.?

The half ticked on without Celtic getting a foothold in the game. Bohan Dixon accumulated a yellow card on the stroke of half time and was promptly replaced for the 2nd half by Amour Lingouba.

The start of the 2nd half was stop start with fouls aplenty. Celtic had many a throw in, none of which looked threatening. A change was needed, McKenna came on but was stifled by the impressive Samuels. The game was passing Celtic by without so much as a testing shot on target.

Telford were content to sit deep and take any sting that Celtic could offer. There was plenty of possession, throw ins and corners, all of which came to nothing. Telford looked dangerous on the counter as Clancy was played through to go one on one with McMillan, who snatched the ball bravely at his feet.?

Chris Simm came on for his first appearance in 6 weeks and looked lively, showing his experience in winning a free kick for Celtic after 80 minutes. It resulted in a spate of corners, one of which resulted in celtics first meaningful effort on target. Matty Hughes found the ball at his feet, releasing a shot which Montgomery in the Telford goal tipped over the bar.

The remaining flashpoint of the game was an off the ball clash on 90 minutes between Osei and Hutchinson, both of whom were booked for their troubles.?

The referee thankfully blew time on the game as Celtic lost their first game in 10. There can be no complaints. A much better performance will be needed if Celtic are to even come close to progressing next week in the FA Cup.