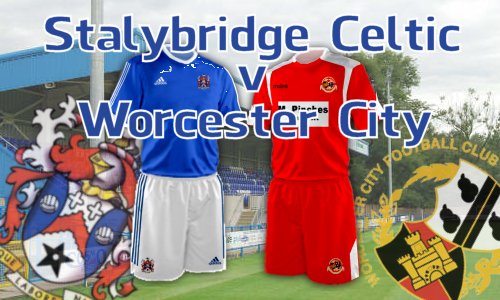 Energy And Imagination Produce A Great Game
By Debbie Taylor 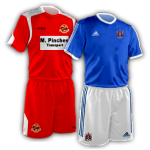 On the day we were reminded that football is just a game, Celtic and Worcester produced a great game.

Within minutes Celtic had Worcester pressed with their backs against their own goal, with Adam Farrell putting a great shot across the face that zipped narrowly wide with Chris Simm sliding in an inch away from converting. When Alex Johnson was through one-on-one with Ethan Ross, Tom Sharpe grabbed and grappled Johnson to the floor: penalty and Sharpe was dismissed. Bohan Dixon stepped up, but his penalty was in a good place for Ross to reach, and the City keeper made the save. Celtic kept coming, Oliver Crowley forcing Ross into a decent stop, Johnson's shot blocked by Alex Gudger and Simm denied by a superb save from Ross.

It wasn't all going Celtic's way; it took two goes for Tony McMillan to deny Lee Hughes's powerful shot, and when Alex Mudimu slid in on Dean Waldron, taking the ball but also upending Waldron, the sides were evened up with a dismissal for Mudimu.

Celtic went about returning to pressure the visitors, but the ball wouldn't fall meaning Alex Johnson's shot skidded wide, and when the shot was on target, Ross was on top form. Celtic were looking threatening from set pieces. A well worked routine saw Adam Farrell blaze over, and Wayne Thomas almost put it in his own net to deny Celtic, and Ross was well placed to deny Matty Hughes's header meaning the half somehow ended goalless.

The second half saw Worcester's goal finally breached. A long throw, a flicked header from Jack Higgins, did Chris Simm get a touch to push it over the line, or had it already crossed it? The fans didn't care, and the goal was given to Jack Higgins.

It was Tony McMillan who took the plaudits for the next ten minutes; pulling off a string of great saves as Worcester looked to get back into it, Deon Burton, one-on-one: denied; Lee Hughes's angled drive after sneaking in unmarked: denied. Lee Hughes also denied by an interception from Matty Hughes after McMillan was beaten.

Then the tide turned, Oliver Crowley on the end of a great move firing in only for Ross to produce a full stretch save, and then Ross getting down really well to push away Farrell's shot. A pair of corners heralded a second goal for Celtic, and this time there was no mistake who scored it. Chris Simm flicking the ball into the path of Jack Higgins, who poked the ball through the forest of legs and into the back of the net.

The second goal gave Celtic the freedom to play, and this culminated in a great free kick from Aidan Chippendale to a completely unmarked Chris Simm who powered his header into the back of the net. Made two and scored one.

Worcester had another good five minute spell, but it looked like Tony McMillan would be keeping another clean sheet as he was called upon to deny Tristian Dunkley when put through one-on-one, but there was nothing the Celtic keeper could do when Daniel Nti dredged up enough energy to burst past Peter Wylie and pull the ball back for Dunkley who curled home.

Chippendale nearly put the margin back up to three with a cracking shot, whilst Celtic never looked troubled at the back.

This game was everything the previous two weren't; full of energy and imagination.