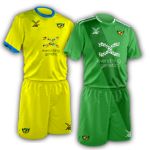 A huge accident on the M6 near Knutsford held up the Celtic team, and several never made it at all. With Dave Miller stuck in traffic, it fell to Gerry Luczka to assemble a team out of the players who had made it through.

With the team shaking off the effects of the harrowing journey, Nantwich started the brighter. Maguire managed to get past Smith to flash a cross through the six-yard box, but Whealing was waiting ahead of Allen to clear. Coming down the other wing came Griggs, and his cross flashed through the box too, only this time, nobody met it.

It was taking Celtic some time to get into gear, but when they did they exposed a shaky home defence. Parr lifted the ball over the flat back for Hindle to burst onto, nobody could catch him and from an acute angle he pulled a sharp stop out Higgins in the home nets. Higgins claimed the corner, under pressure from Parr. Gardiner almost let the side down with an awful back pass that had Higgins racing from his box not at all certain that he would get there ahead of the lightning fast Hindle, however he did, and Gardiner was let off the hook.

The first half settled down again with not much in the way of entertainment, until Allen collected the ball off the wing and German headed his cross out for a corner. The corner was well worked, spun to Griggs, dead centre, thirty-yards from goal, but the finish didn't match, shooting over the bar. Celtic responded, and Whealing pushed up putting a great cross in that Jardine could clear only as far as the waiting Sykes, the shot was cleanly struck and powerful, taking a number of deflections on its way out for a corner. The corner came to Keeling, who had his shot prodded around the post by Pullar. Keeling got onto the second corner as well, this time heading over the bar. Keeling's defensive partner didn't make it to half time. Stopping Lawton meant he had to be replaced by Bowker.

Celtic were gifted a free kick twenty-five yards from goal when Pullar needlessly controlled a hoofed clearance from Celtic with his arm. Fortunately for him, Celtic could not make use of this with Jardine heading clear.

As the half started to run out, Keeling got forward enough to float a ball for Sykes to run onto, breaking the offside trap, but his contact wasn't brilliant, and Higgins scooped the ball up. Nantwich got their own chance as well, when Smith handballed just outside the box, and Maguire flashed his free kick across the face of goal with nobody to meet it.

Celtic finished the half the stronger of the two teams, with Sykes feeding the ball into the box for Bonsall to run onto, he did so, producing a fine stop from the Nantwich number one. Smith then did a lovely reverse pass to Hindle who raced into the box, his shot blocked by Owen for a corner. Higgins claimed, dropped and claimed again before Celtic could react.

The second half started as the first half ended, with Celtic attacking. Bonsall spotted Smith's overlapping run, and put Smith in with a well-weighted ball, Smith got the ball under control instantly and fired off a low shot that was blocked.

Nantwich's first effort on target came at the start of the second half when Maguire found some space yards outside the box. Dootson caught the shot comfortably. Nantwich continued to attack, and Celtic let them. Griggs put a superb cross through the six-yard box, but neither of two waiting Nantwich strikers could reach it. Celtic cleared the ball as far as Gardiner who tried the instant shot from forty yards, but it sailed over the bar.

Celtic had got too placid at the start of the second half, and need to step up a gear. Smith started this process when he raced past two players before spinning a ball to the far post where Sykes came rushing in ahead of his marker and put his header into the side netting.

Smith got his reward for this moments later when Gardiner was forced by Smith into a pass back to Higgins, with Smith still bearing down on him, Higgs sliced his clearance and it fell to Hindle. Hindle fed it across the penalty box towards Smith, Jardine could have cleared, but panicked and missed his clearance. Just inside the box Smith took advantage of these defensive howlers by smashing the ball into the back of the net.

Nantwich could have got back into it immediately when Bonsall was adjudged to have brought down Maguire just outside the box. The free kick went across to the far post where Maguire volleyed towards goal and Dootson's reaction save pushed the ball onto the post and out for a corner. The corner was cleared.

Celtic took heed of the scare, and when Parr was fouled in the middle of the park produced a stunning display of passing. German slid the ball short to Hindle who raced forward before dropping the ball off to Whealing. Whealing put a pinpoint pass to the penalty spot where Bonsall arrived and clinically side-footed the ball past Higgins, capping an excellent comeback by the Celtic midfielder.

Again, Nantwich could have responded immediately. Substitute Danny Landstrom powered past Smith and put a ball across the face that was not met by either striker, but was met by Griggs arriving at the back post with Dootson well out of position, he shot first time and brought a first class save from Celtic's number one.

Bowker produced a 60-yard pass from somewhere that freed Hindle to run into the box, and only a last ditch from Pullar denied Hindle his opening goal. Hindle was not so easily denied though; the corner wasn't cleared, coming back to Whealing who slid it sideways to Hindle. Hindle's strike was powerful and clinical leaving Higgins now chance.

Yet again, straight from the off Nantwich could have pulled one back, when Bowker fouled Beattie just outside the box. Maguire got a free header inside the box, but headed over the bar.

Celtic now looked like a team three divisions above their hosts and were passing it around fluidly, and looking quite comfortable. Sykes slid the ball through to Monk, who held off Gardiner and Davis long enough to have a shot on goal, but Higgins reacted well smothering the ball. Bonsall put a wicked ball to the far post where Hindle was arriving, but Pullar got there first, his volley almost creeping into the top corner, but going narrowly wide. The corner was fed out to Smith who put a great ball in, which Monk headed just wide.

With a three-goal cushion and five minutes remaining, one of the youth team was introduced; Adam Jones replaced Parr. There really wasn't much for Jones to do with such a short time left, but he did provide the link up play in the dying moments that put Monk through, but Parkinson deflected Monk's shot for a corner. Player/Manager Davis got away with conceding a penalty to add to their woes when his blatant hand-ball was ignored by the officials.

With the Celtic players protesting, Nantwich attacked, and German's interception and clearance only got as far as Beattie who shot instantly and produced a great save from Dootson to hang onto the clean sheet.

But this was Celtic's game now, and they were getting a bit cocky. Hindle controlled a long diagonal ball instantly and his cross almost turned into a shot when it zipped just past the upright. This confidence resulted in a capping goal as the final kick of the match when Smith went on a mazy run through the whole of the Nantwich team before entering the box and striking a sweet shot that Higgins did really well to save, and the home keeper was unlucky that the rebound fell to Hindle who cut inside his marker and unleashed a top corner shot with Higgins still scrambling to his feet.

Nantwich acquitted themselves well against a Celtic side that had faced some adversity to put a team out, and taken some time to get over the travelling to the ground, but they did it and got a morale-boosting win ahead of the vital clash against Vauxhall on Saturday.

It's a shame that Dave Miller missed it.