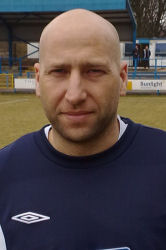 Danny played for his home town club of Altrincham in 1997 making forty-one appearances, before being snapped up by Macclesfield Town in 2000 for ?15,000. He made nearly one hundred and fifty appearances for Macclesfield, and scoring twice, before joining Stockport County in 2004. It was a season and thirty-nine appearances for County and then a move to Huddersfield in 2005, for two seasons and sixty-eight appearances. In 2007 he joined Morecambe and made one hundred and thirteen appearances over his three years there, before joining Celtic to be reunited with Jim Harvey.
Photographer