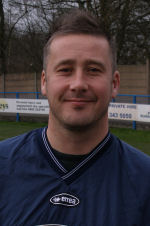 Simon was thrown in at the deep end on his arrival, stepping straight into the starting eleven against Worcester. He joins from Spennymoor Town, a team for which he started in every game since joining in January 2007. Prior to that, he was at Gateshead since his release as Jamie Speare's deputy at Barrow. That was his second stint at Barrow, a team for whom he made of 200 appearances, won countles Player of the Year awards, culiminating in his final season seeing him win supporters, players, website and national supporters club player of the year. He joined Barrow in 2000 from Dunston FB, a North East Counties league team, where he was regarded as the best keeper in the division. Prior to that, he was with North Allerton and Whitby. The first team he played for after leaving his internship at Newcastle was Guisborough, almost a local team for the Middlesborough born lad.
Photographer