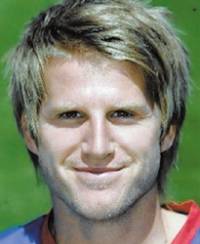 On loan from Chesterfield
Gareth joins on loan from Chesterfield, needing competitive games after suffering a broken toe in August. He started his career with Sheffield United in their youth program, moving to Buxton upon reaching 16. in 2001, he won Young Player of the year at Buxton. A year later and he moved onto Chesterfield, moving out of the reserves and into the first team. He has gone onto make over 130 appearances for the Spirites, scoring four goals.
Photographer