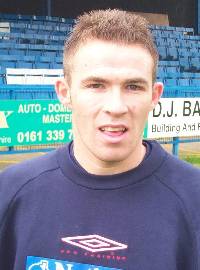 Ged is a Manchester born lad. He can play midfield, but it is as a defender that he is most comfortable.
He started as a Trainee with Oldham Athletic, before moving on to Barrow. With a change of management came a change of clubs. Though he had a trial at Lincoln City, he joined Stafford Rovers instead, where he had an impressive season. After a trial at Northwich Victoria, he joined Hyde United, before being spotted by a Leigh RMI scout at the beginning of Leigh's first conference year. After a season with the Celts he joined the Bloods, moving to Droylsden.
Career
Position
Defender
Born
19th Dec 1978 (42 years)
Joined
1st Jul 2001
Left
5th May 2002
Last App
27th Apr 2002
Last Goal
9th Feb 2002
Career
Appearances
47
As Sub
7
Subbed off
3
Goals
1
Assists
0
Red Cards
0
Yellow Cards
0
Points
55 / 141
Average Points
1.17
Wins
15
Draws
10
Losses
22
Total Pitch Time
3729 mins
Appearances
Sponsors
Main club sponsor