Woking desperately wanted to hold on to Conference status, whilst Celtic appeared not to be to bothered which division they play in next year. With a couple of exceptions, Celtic did not want to chase the game, make those tackles, challenge for the ball, and this gave Woking an easy ride in the middle of the park.

It was in defence where they were strong though. The back line held Celtic (mainly Ayorinde) at bay with three deep tackling. Whenever one was beaten, there was still two to get past.

Nothing much of note came from the few Celtic forays in the first half, as they failed to grasp the initiative and find away through the stalwart back line, though a nice bit of skill by Courtney allowed him to flick the ball over the top of his marker and fired in a great cross, only to find that nobody had followed his forward run, and the ball sailed away.

Meanwhile though, Moore was having the run of the park as Murphy and Perkins failed to pick him up each time in the right channel. Walker had to be alert early on as Moore fired in a low cross from the edge of the area for D'Sane, but Walker read it well, intercepting the ball on the floor.

After Moore won a corner, it took a great sacrifice from Beesley to keep Woking out, as Walker couldn't hold the corner, and Steve Perkins headed it over the Celtic defence to Griffiths. Beesley stretched too far to block it, and required treatment once the game had been stopped.

And it was from the left wing that the goal came.

Reece set Moore off on a run with a weighted pass that left Murphy nowhere. Perkins came across to intercept Moore, but the winger stepped around the Celtic defender like he wasn't there, and by the time Murphy got back, he stepped round him too (nutmegging him in the process), before firing in a low cross. This time Walker did not smother the cross, or make himself big at the feet of D'Sane, and the striker side footed it into the middle of the net. Celtic's inept defending was exposed.

Fortunately, this seemed to be the extent of Woking's goal scoring repertoire, and though Reece still continued to have free reign down the Celtic right, Williamson and Beesley were the experienced heads and feet that stopped anything coming from it. 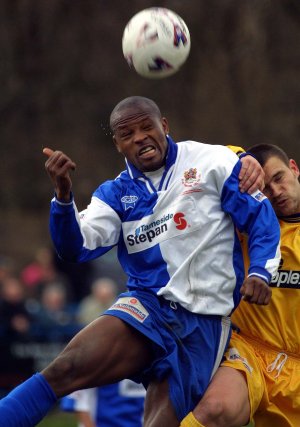 Celtic did have a shot on target in the first half, but it didn't test the inordinately tall Bevan in Woking's goal, as Parr's header beat the keeper, only to have the other Perkins on the field (Steve) stick out a leg and block it on the line and then Reeks wellied it clear.

Walker made amends for his lack of action in the first half at the start of the second half when Griffin was going nowhere in the face of Williamson and tried a turn and lob over Williamson which Walker athletically tipped over the bar.

Celtic did have more about them in the second half, but it was never going to be enough. A bit more invention in the Woking box allowed them to try and break down the stubborn back line on three occasions. From a corner (won by Murphy of Moore) was whipped in by Pickford for Shandran to head confidently down past a crowd of players. It was one foot to the side of Bevan, and he showed great agility in getting down from such a great height quickly to smother the ball.

Celtic managed to gain a bit of the initiative and pressed for the equaliser: Ayorinde going narrowly wide after bursting through the Woking defence.

From a free kick Woking's defence was left in tatters as Bevan was beaten not once, but twice, somehow a Woking players were managing to throw themselves in front of the ball, showing the determination that they had to stay in this league. The first effort came from Pickford who's half volley was blocked by Reeks on the post, only for it to fall back to Ayorinde, who stuck out a leg trying to push it into the net from inches away, but Bevan got a hand to it, sending it out to Turley, who's rasping shot was blocked by Perkin's leg, ricocheting it back to Murphy, whose shot cleared the bar and allowed Woking some respite. But it wasn't long before Trainer's cross was inch perfect to Ayorinde, allowing him to beat Boardman with one touch, and line up his shot with Bevan struggling to get back into position, but Steve Perkins slid in dispossessing the Nigerian international.

Trainer intercepted a ball as Griffith pushed it to far ahead of himself, and lobbed it 30 yards back to Williamson stood just inside the Celtic box. With the nearest Woking player being Griffith, now 40 yards away, Williamson had the time to let the ball run past him, control it, and decide what to do. However, he chested it down, as time was running out, and he wanted to snap off a quick pass, which is what he did, finding Parr with a well struck long pass.

Though his hands were down by his side, and his back was to the linesman, the linesman raised his flag across his chest, possibly in response to the crowd screaming for handball - though it was no such thing. The referee had been in a better position to see and three times as close, went with his assistant. Griffiths stepped up to take the penalty, and everybody could tell where he was going to kick the ball from his body language. Walker too could tell, and got a good touch on the ball, but it was just too powerfully struck, and went in anyway.

That was it for Celtic, they slumped. They may have been able to grab one goal back, but not two in five minutes. And they didn't even try,

I predicted before the match that which ever side lost this match would go down. Celtic have three games to prove me wrong, starting at local rivals Northwich in three days time. It's going to need a lot more determination to beat them.