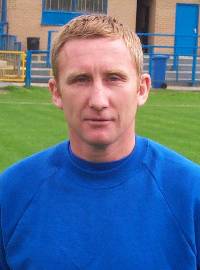 Steve started playing for Chadderton at the beginning of his career (he helped them win promotion), before moving to Mossley where, during his two year stint, he helped them to the Manchester County Cup (they beat Droylsden in the final). So impressed with him, were Droylsden, they snatched him away from the Hillmen. He failed to reach his true potential for the Bloods, and instead came to Celtic.
Ashton United was his next stop, where he helped them win promotion into the Unibond First division. Eventually, he wound up at Macclesfield, where he has had some impressive seasons, winning the conference championship twice during his 5 year stay with the Silkmen, and becoming their leading goal scorer while in Division 3 (13 goals in one season!). Paul Futcher has tempted him back to Celtic, to keep the Celts on track in the conference, but at the end of the season, he retired.
Steve lives in Oldham.
Career
Position
Midfielder
Born
23rd Jun 1963 (58 years)
Joined
1st Jul 1992
Left
5th May 2002
Last App
27th Apr 2002
Last Goal
23rd Feb 2002
Career
Appearances
55
As Sub
5
Subbed off
9
Unused Sub
3
Goals
2
Assists
0
Red Cards
0
Yellow Cards
0
Points
68 / 165
Average Points
1.24
Wins
19
Draws
11
Losses
25
Total Pitch Time
4380 mins
Appearances
Sponsors
Main club sponsor