All in all, it is just another hole in the wall
By Iain Benson 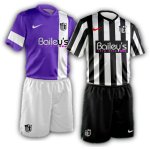 A brace of goals from Craig Hobson were not enough to give Celtic the three points against a Corby team who took their chances well, and defended in two banks of five.

From the moment that Craig Hobson broke free with a great ball over the defence, only for him to smash the ball against the upright, it was obvious Celtic's recent run would continue. It did, when Greg Wilkinson was flattened in a challenge and had to leave the field with a suspected fractured rib. With the better of the play, Corby content to sit back and wait for an opening, Celtic looked the most likely to score. A sensational cross from Joel Bembo-Leta was met by a superb header from Hobson, but it went narrowly wide. Rhys Meynell was the next to go close, looping his header from a set-piece routine over the bar.

The pressure had to tell eventually, and Hobson's turn and shot was well put around the post by Fabian Spiess, but the German keeper could do nothing as the corner came flying in to the back post and Craig Hobson powered his header into the back of the net.

Seconds later and it could have been two, as Hobson tried to repeat the trick off a second corner, but hit the side netting, and then again Hobson found the space in a crowded box to turn and shoot, with Spiess making the stop at the expense of another corner. Corby again struggled to clear the corner, but Austin's shot at the end was well claimed by Spiess.

Celtic went looking for the safety goal, and when Delroy Gordon upended the full flight Andy McWilliams just outside the box, Celtic had a chance. However, with McWilliams still off the pitch there was enough space down the left for Corby to exploit, and they did, Andy Hall racing clear as the free kick broke down, putting in a good cross for Gregg Smith who hit the ball om the run with a lot of power, it flew over Budtz, hit the crossbar and across the line.

Celtic could have retaken the lead straight from the kick off, with Arthur Gnahoua forcing Spiess into a decent stop, the rebound coming to Hobson who forced the Corby keeper into an even better save.

Celtic did retake the lead, Mitchell Austin feeding Hobson at the edge of the six yard box, and somehow, Hobson turned, and picked the perfect spot with enough power to beat Spiess.

With just fifteen minutes left, Celtic had to keep it tight. A harshly adjudged foul when Warburton disposed substitute Leon Hibbert. In order to see the ball, the wall was set up with a massive great gaping gap in the middle of the net big enough for Gary King to fire in arrow straight into the top corner.

Celtic went all out for the winner, and Craig Hobson was desperately unlucky when Paul Mayo#s leg denied him the winner and his hat-trick.

Stoppage time was long enough for Mayo to try his luck from ninety yards from a free kick, with Budtz off his line, but it was from such a great distance he had time to retreat to his line and make the catch. There was also enough time for Hobson to fire across the face, and have Spiess make the save at the expense of a corner. Celtic couldn't convert the corner, or the next one and time simply ran out of time.