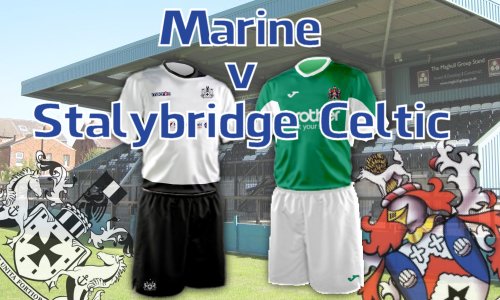 Away Loss At Marine
By Debbie Taylor 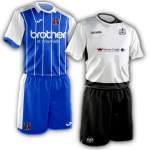 Celtic's away day hoodoo continued with a 3-1 defeat away at Marine, despite playing reasonably well, many of the problem that have beset the team resurfaced.

It was an even affair up to the first goal, with both sides creating chances. Both Danny Mitchley and George Lomax had early efforts comfortably saved by Jack Walton, whilst John Cofie fired across the face, and Liam Dickinson saw his angled powerful drive caught at the near post by Germano Mendes. Around twenty minutes in Marine spurned a couple of glorious chances, Mitchley unable to find the power to beat Walton and Lomax missing the target when he should have done better.

With Celtic looking stuttering, Marine piled forward, Peter Wylie whipping in a fast paced cross into a dangerous area where James Edgar came flying in with a thumping header that gave Walton no chance.

Celtic came back strongly, and looked more like the team of the previous two weeks. After good build up play, Theo Bailey-Jones snapped off a fantastic shot that flew inches over the bar and Mendes saved Tom Brown's twenty-yard effort more by look than judgement, the ball hitting his chest. More good build up saw Greg Wilkinson interchange with Bailey-Jones and snap off a drive that Mendes could only palm around the post, whilst Oliver Roberts was also denied by the Marine keeper.

During this period, Oliver Crowley had to limp off the field to be replaced by Danny Morton, with him and Celtic pressing, there was a big gap at the back, which Vinnie Bailey exploited with a deep cross from just inside the Celtic half to find Danny Mitchley who had time to set himself for a wonderful volley that flew into the top corner.

The second half saw Celtic looking for the early goal that they needed. After Wilkinson had shot over the bar and Bailey-Jones had forced Mendes into another flying stop, Phil Baker gave Celtic the opportunity they needed when he clipped Liam Dickinson's ankle in the box as he was setting to shoot. A booking for Baker and a penalty for Celtic that Dickinson dispatched delightedly.

A goal behind, Celtic looked better, Brown fired over the bar from the edge of the box and a delightful pass from Wilkinson allowed Bailey-Jones to run at Mendes, the Marine keeper pulling off a great point-blank save.

Celtic's penchant for conceding comedy goals continued when for some inexplicable reason, Jack Walton was forty yards from his goal when Marine broke, substitute Dom Marie picking up the ball. Walton struggled to get into any kind of position and Marie rolled the ball past him from thirty yards into an empty net.

Celtic could have been back within a goal just moments later when Bailey-Jones latched onto the world's worst goal kick from Mendes (with him already holding the top five worst goal kick contenders). One-on-one with Mendes Bailey-Jones perhaps should have squared to the unmarked and rapidly approaching Dickinson, but chose instead to go for goal, and Mendes repaired the damage his kick had caused by pulling off a great save, getting just a clipped foot on the shot that was enough to push it wide.

It was a ?what if? moment. What if Walton hadn't been near the halfway line and what if Bailey-Jones had squared the ball. Neither happened, and for the second time this season, Marine take all three points.