We like it, they lump it
By Debbie Taylor 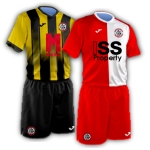 Rather unusually, the President's cup final is to be held over two legs this time, with the second leg being in a months time. Celtic will be taking a two goal advantage into the second leg.

As we have seen previously, Ashton are a big side. Imagine nine Martin Filsons. They play to this strength with lumped long balls and physical muscling in the box. To top it off, Celtic were missing Greg Pearce thanks to a red card offence against Hucknall a week ago. This made it difficult for Celtic to deal with the lumped balls. German had stepped into Pearce's size twelve's, and despite being a foot shorter, acquitted himself.

Celtic kicked off towards their own fans, and within ten seconds, after giving to and receiving the ball off Eastwood, Potts saw Trueman, the Robin's keeper well off his line, and tried an audacious chip from fifty yards that whizzed only narrowly wide.

Ashton muscled their way up field, and Bowker conceded an early corner in his constant tussle with Miller. The corner was poor and Hooper saw Potts on a run, finding him perfectly with his clearance. Potts had almost empty space to run into once he had stepped past Carty, but seeing Wharton racing into the box, he instead put a great ball into his path. The experience of Trueman paid off, and he read the flight of the ball well, arriving inches ahead of Wharton.

Morris up ended Potts about forty yards from goal. Rather than shoot immediately, he squared it to Fitzgerald, who lifted the ball over the whole defence back onto Potts' foot as he entered the penalty area. His first time snap volley sailed inches over the bar.

Celtic seemed to run out of ideas for a while, and this allowed Rush to get up field and get onto a Dormer's back heel which he hipped in first time. The defenders had followed Miller, leaving Denney alone as he entered the box, and Denney doesn't miss chances like that - his header thumped well out of reach of Dootson.

Celtic's response was immediate. Right from the restart, Eastwood tried to improve on Potts chip from distance, but he too beat the keeper and missed the target from distance. However, they got the ball back right off the goal kick, and Fitzgerald came down the left flank. He turned Rush inside out and saw Mayers coming in at the back post. The cross was perfect, and Mayers' header matched it, a direct copy of the goal minutes before.

A period of Celtic dominance started then, with their range of passing outclassing that of Ashton's. Another excellent cross from Fitzgerald was nodded down to Parr by Mayers, but the Celtic captain's first time volley was wide.

Celtic's passing did occasionally go wrong, and Parr's lax short pass to Wharton was intercepted by Smith, who raced towards goal. As Bowker covered Smith, Dormer was left alone. Smith's pass left Dormer with little to do, but he hit his shot wildly over the bar. And from a throw, Dormer again got to the ball first, hooking it over his shoulder towards goal from close range, but Dootson reacted well, plucking the ball out of the air.

Eventually, Celtic's passing started to result in chances on goal, with a good chance falling to Mayers, whose first touch made himself some space amid a knot of defenders, but his shot was weak, and Trueman easily collected. But Mayers made sure with his next effort. Parr nodded a Potts cross down into the path of the tall centre forward, and Mayers controlled it well with his knee to go past Carty, his shin helped him past Riordan, and though his shot lacked power, it was accurate, beyond Trueman and into the far side of the net.

A lumped ball from Denney turned into a shot when it crept just over the bar with Dootson stretching, wasting Ashton's momentary possession. The ball was straight back down the other end with great vision from German. Eastwood ran around his man to keep the ball in, knocking it back to Potts. Potts and Wharton interchanged to give Potts a clear site on goal, but Trueman was well positioned and collected the shot easily. Mayers kept German's long ball in play with a back flick to Potts, but the tricky winger's low drive across the box was just behind Parr, who did well to direct it towards goal, but it was wide.

Fleury bundled Parr over about thirty five yards from goal. Potts slid it to Eastwood, who in turn knocked it on to Wharton. Wharton could have struck the ball first time, but he hesitated a fraction of a second allowing Rush to cover. Wharton lifted it over the whole defence, but it was a scant inch to high for Eastwood to direct it, and another chance sailed wide.

When Bowman, the stand in full back, gave away a corner towards the end of the first half, blocking Smith's cross. Royle ploughed his way through a crowd of players to nod the ball into the back of the net, but the referee had blown long before he got onto the ball, noticing the flattened players in the wake of Royle.

Eastwood was getting closer to goal with every effort. Fitzgerald's cross was nodded back into the danger area by Mayers, as it bounced awkwardly, Eastwood half volleyed it just over the bar.

Bowker tangled with Smith some forty yards out. Morris went for glory with the free kick, and it took an excellent reaction save from Dootson to palm the ball over the bar. Parr headed the corner clear, and Hooper sent the ball into the safer half of the field. As the first half ran down, Ashton were searching for an equaliser. Morris tried another distance shot that dipped just over the bar, and Smith provided a cross for Dormer that took excellent reactions from Dootson to palm it off his head. Thanks to that, Celtic went in at half time leading by one goal.

Ashton continued the second half as they had ended the first, looking for an equaliser. A free kick granted by Bowman was wasted and sent over the bar, and a corner conceded by Fitzgerald blocking Rush's cross was headed clear by Mayers. Fitzgerald then looked to have fairly tackled Royle, but the referee gave a free kick. Morris' free kick was headed clear by Mayers, but only as far as Royle. His shot was powerful and from distance, tipped over the bar by Dootson. Mayers was again helping the short Celtic defence out, denying Carty any shooting opportunity off the corner.

Miller somehow evaded Bowker's close attentions to get into the box, but Bowker, who had an outstanding game stayed with him, and Miller could not get any power on his shot making it simple for Dootson.

Celtic moved up a gear after surviving quarter of an hour of probing by the Robins. Potts twisted and turned his way past Riordan and Royle to get a shooting chance, Trueman athletically turned the dipping shot just over the bar. The corner was spread out to German, but he could not find a Celtic shirt in the box with his cross. Potts turned it on again when he collected the ball at the half way line and raced to the corner flag eluding Carty long enough to drive a low cross into the six yard box. With Wharton and Eastwood arriving ahead of the trailing defence, it was just a question of who would get the touch - it was Eastwood. A simple side footed goal to take his tally to twenty nine goals this season.

With Ashton still reeling, Wharton danced pasty McCarthy and put a great ball into the path of Potts. Potts still had work to do, but his first touch took out the whole back line and left him one on one with Trueman. He picked a part of the net where Trueman wasn't, but somehow Trueman got a hand on it, such was the power and accuracy of the shot though, that this didn't stop it from landing in the back of the net. Celtic had some clear water between them and Ashton, and what would have been an unassailable three goal advantage for the second leg.

But the advantage didn't last long. A long ball from Carty went over the Celtic defence. Dootson came, but couldn't reach it, leaving him stranded when Smith received it at the edge of the penalty box. Smith lobbed it high back to the back post, where Denney was again unmarked, and slotted the ball into an empty net.

Denney should have been sent off moments after his goal, but all the officials missed the way he slid through the back of Bowman after the Celtic man had laid the ball off to Potts. It wasn't even given as a foul!

Denham was brought on to try and take advantage of the high defending by Ashton, and his first touch saw him race into clear water. He brought the ball back to Potts, but his shot went sailing over the bar.

With only a two goal deficit now, Ashton were looking for goals as the game started to run down. A last ditch block by Bowker, that left him injured, denied Rush his crossing opportunity at the expense of a corner. Whilst Bowker was off the pitch, the corner was taken, and Royle got to the corner ahead of Parr, but headed wide. But Parr did get there ahead of Dormer moments later heading narrowly around his own post off Miller's cross. Bowker had to leave the field again, and Caldicott was brought on in his place, he had a calf strain. Without a recognised central defender, and making a substitution during a corner, things looked dodgy, but Caldicott's first touch was to clear Miller's header off the line! An inspired substitution!

Hallows was brought on as stoppage time started, but despite Celtic winning a corner in the dying moments, Hallows couldn't get a touch. It didn't matter though, Celtic had won 4-2.

This sets Celtic up nicely for the second leg at the end of April, but now the league beckons. Celtic's lack of a league game today left Vauxhall motors to grab a vital three points, and move up to third, pushing Celtic down to fourth in the table. Celtic go to Vauxhall whose home record is equal to Celtic's. This is a crunch match that could ultimately decide the placings in the final table.