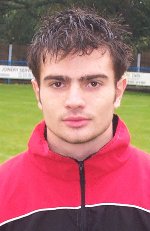 Steven is the younger brother of Michael Clegg. Like his brother, he came up through the Manchester United youth team, and unlike his brother Michael was not destined to move into the first team, coming instead to Stalybridge Celtic after a spell in the United reserve squad. Steven has played against Celtic in the past, Glasgow Celtic that is, when the United reserves went down 2-3 to the green and white hooped ones. After a single season with Stalybridge Celtic, however, he decided to pursue his career in the States.
Career
Position
Defender
Born
16th Apr 1983 (38 years)
Joined
8th Oct 2002
Left
1st May 2003
Last App
26th Apr 2003
Last Goal
Never Scored
Career
Appearances
15
As Sub
7
Subbed off
1
Unused Sub
2
Goals
0
Assists
0
Red Cards
0
Yellow Cards
0
Points
35 / 45
Average Points
2.33
Wins
11
Draws
2
Losses
2
Total Pitch Time
665 mins
Appearances
Sponsors
Main club sponsor