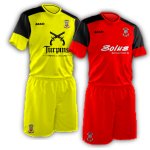 An early goal from Nurse settled the visitors, but only a fine goal keeping display from on-loan keeper Palethorpe sent Tamworth through to the next round.

Tamworth's goal came when Barwick's back-pass forced Gamble to come racing out of his box, for Nurse was always the more likely to reach it. Gamble got something on the ball to send it looping into the air, but Nurse got onto the ball first, and there was nothing Gamble could do but watch as the ball was rolled into the net.

Celtic got back on with it, and it was an even first half, with both sides trying to create chances. A good move started from Winn culminated in a flashing shot from Ellington that looked destined to settle in the far corner of the net, but Palethorpe had other ideas, and a full stretch save denied Ellington.

From a corner at the other end, Gamble was called into action from Briscoe, conceding a second corner, but soon the action moved to the other end and Keeling won a corner out of Lyttle that was cleared as far as Barwick, but his shot was a comfortable save.

Wright had a shot from the edge of the box, but Gamble smothered, before Keeling had a distant effort collected by Palethorpe and Ellington saw an overhead kick flash past the upright, and Dean's low angled drive also zipped narrowly wide. As the half went towards its conclusion, Richter and Bampton both saw shots go wide of the Celtic goal before a crunching tackle from Winn on the halfway line in which he appeared to get the ball saw Nurse react angrily. Winn stood up to his opposite number, and the referee showed Winn the red card without hesitation reducing Celtic to ten men despite the protestations of the Celtic contingent.

Celtic finished the half with a containing action, and Haran was brought on for Garner to allow Barwick to push into midfield as Celtic moved to a 3-4-2 formation. As the back line reorganised, Wright forced Gamble into an early save. Celtic settled and started creating chances of their own again, Barwick forcing Palethorpe into a good stop, and Barlow should have equalised with his low drive, but for another good stop from Palethorpe.

Robinson was causing problems for the Celtic defence and got beyond Haran to take a shot, but Gamble was up to that one, but form a wicked cross, a flicked header from substitute Williams allowed Robinson to get beyond the defence and thump a header into the top corner out of Gamble's reach and it looked all over for Celtic.

Roca and Hall were brought on to freshen the attack, and Hall had an immediate impact forcing Palethorpe into another full stretch save.

The sides were evened up when Nurse got his second yellow of the match for a foul on Barlow, and it was ten v ten.

Palethorpe then pulled off his best saves of the match when Meechan raced beyond the Tamworth defence and Palethorpe's instinctive block denied him, the rebound coming to Barlow, but somehow Palethorpe had got back to his feet and pulled off another, even more impressive save. From the corner, the ball came to Barlow who took a tight angled shot that Palethorpe again did well to save, at the expense of another corner that saw Barlow flattened and Tamworth cleared, with play not stopped for the head injury it had to wait for a foul from Keeling, before Pover could come on to treat the still down Barlow.

Roca worked some space at the edge of the box, but again Palethorpe was in the right place to keep his clean sheet, and as the game ran towards stoppage time, Hall first fired narrowly wide before again forcing Palethorpe to earn his crust with a half volley from ten yards. Sykes and Meechan both went close, but it was not enough, and Celtic found themselves exiting the Trophy leaving them nothing but the league to play for.

The red card for Winn certainly changed the face of the game, but Palethorpe's performance was the real difference between the two teams, with him more than able to keep out everything that Celtic through at him.